We believe that well-located, best-in-class student housing projects at large universities in major conferences will win over the coming year.

Of all major commercial real estate asset classes, student housing has been, arguably, the most misunderstood in 2020. In the span of just a few months, this space has experienced: 1) disruptions leading to the failure of numerous colleges around the US, 2) a complete lack of visibility into the viability of student housing in the short term, and now 3) headlines that highlight national numbers of declining student enrollment, yet record enrollment and strong fundamentals at stronger universities across the country. In the CrowdStreet Investment Thesis, we explain that, while micro-market trends drive the student housing sector, the anchor university serves as the key determinant of the success of a student housing asset. This phenomenon is most present now, in the wake of the Covid crisis.

When CrowdStreet first published our Investment Thesis this summer, we purposefully omitted student housing. At the time, there were still many unknown factors that loomed over the entire sector. Were universities really going to open in the fall? Were students actually going to return to campuses? How many students would defer to next year’s enrollment? Even if campuses opened, would they be able to keep students safe and remain open? How would larger public universities fair versus small colleges? As a result, we took a cautious approach to the sector and worked to gather as much information as possible. As the school year began, we witnessed a series of events and motivating market data, which led to the emergence of our overriding thesis around student housing:

We believe that well-located, best-in-class student housing projects at large universities in major conferences will win over the coming year.

Sometimes a major shock to a market, as just witnessed with COVID-19, causes a shakeout of a market and brings clarity to its outlook. With student housing, we believe we have just experienced that market-defining event. The roller coaster ride of March to October has shed light on who the most likely winners are going to be this cycle – no other asset class has provided this much clarity this fast. And given its inefficiency, we believe the market has not yet digested this event and priced in its outlook.

We will walk through the series of events that have transpired from March to October of 2020 and discuss why we now believe that student housing at large universities has a bright future ahead of it.

A Shakeout Of Small Colleges

The beginning of the pandemic was a period in which the student housing sector received repeated major blows. As universities across the country shut down and sent students home, student housing vacancies skyrocketed. As this happened, colleges and universities saw revenues plummet and some smaller colleges began to fail. So far in 2020, according to EducationDive, 13 small schools have decided to close this year or are planning to consolidate with other schools in the near future. A rash of school closure announcements this spring left us to wonder just how far the distress in higher ed would go and when it would end.

In retrospect, we believe this created a couple of effects with both short-term and mid-term ramifications on student housing. First, as colleges failed, it marginally decreased the supply of available seats. Assuming that the vast majority of displaced students will find their way back to other schools by next year, the remaining stock of universities and colleges will see an uptick in enrollment demand.  Second, and more important, we believe the failure of these small colleges in 2020 will likely weigh into students’ (and parents’) enrollment decisions for years to come. Graduating from a college that fails post graduation dilutes the value of your diploma. Considering the heavy price tag of a college education, that is an expensive risk, and there is no easier way to hedge that risk than to attend a large, well-capitalized university. As a result, over the course of the next real estate cycle, we expect momentum to shift towards larger universities at the expense of smaller and weaker institutions.

Student housing, like any market, must balance forces of supply (number of available beds) and demand (number of students seeking beds). The long-term viability of a student housing market is highly dependent on consistent, sustainable growth in the student population it serves.

For weaker, second-tier colleges and universities, consistent, sustainable enrollment growth can be challenging. These are the colleges and universities that need to sell themselves to attract students. However, colleges and universities that have already achieved elite status and are selective, perhaps even highly selective, enjoy a massive advantage when it comes to meeting their student enrollment targets for the following year. As we just witnessed in 2020, when a major disruption hits your market, you can simply increase your acceptance rate and meet your goal. The consulting group, College Transitions, provides the acceptance rates for the Class of 2024:

Preparing for deferrals and reduced enrollments, with the exception of Princeton University, every other Ivy League school increased its acceptance rate this year. When you are an elite school, not only are your admitted students more likely to attend your university, but any shortfall caused by an exogenous shock (like a pandemic) can easily be backfilled by simply admitting a few more students. This is a powerful advantage for selective universities and, considering that student demand is one half of the economic equation for each student housing market, the quality and desirability of the anchor university should not be overlooked when determining which markets to invest in during the next cycle.

Purdue’s COVID-19 response program began as early as January this year and the university began taking decisive actions in February. On June 11, it unveiled its comprehensive plan for re-opening its campus on August 24, 2020, which included protocols for testing, criteria upon arrival, social distancing, reduced classroom and campus housing capacities, blending in-person and online classes, disciplinary actions for failing to adhere to the program, and more.

Protect Purdue has stood out as a leading example of developing and implementing an effective plan to combat the spread of COVID-19. As a result, it was of little surprise to see Purdue shatter its enrollment record in 2020, admitting an incoming freshman class that is 11% larger than its 2019 freshman class. Overall, the superior capabilities demonstrated by larger universities, such as Purdue in dealing with COVID-19 likely won’t be forgotten for the following one to two years, providing yet another reason for students to select a large university over a smaller college.

The ability to finance commercial real estate assets is important and student housing enjoys one of the best positions of any sector. Along with apartments, student housing is one of the few asset classes that benefits from the ability to place agency financing on it via Fannie Mae and Freddie Mac. With much discussion in 2020 with how the availability of cheap agency debt for apartments (with 10-year fixed interest rates now hitting below 3%) is providing a strong pricing floor for multifamily assets, there has been much less discussion of how these same low-interest rates also apply to student housing. The low-interest rate of 2020 is significant because student housing cap rates roughly correlate to the 10-year treasury rate over time.

From 2001 – 2019, according to Real Capital Analytics, the spread between apartment sector cap (of which student housing falls within) has ranged between 100 bps and just over 400 bps as shown below: 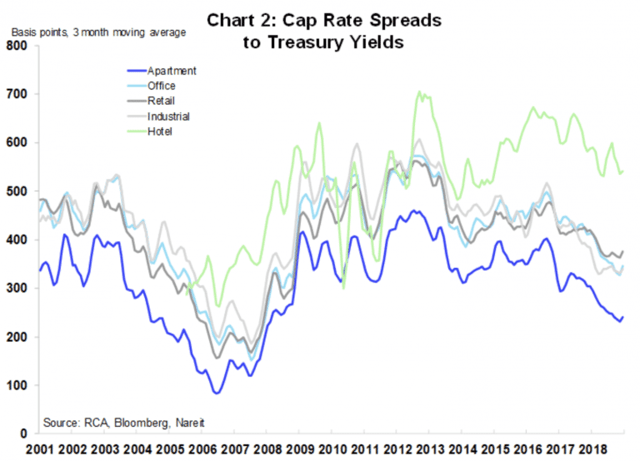 For this spread to contract, either interest rates must rise, cap rates must fall (i.e. prices rise all else equal), or a combination of both must occur. With the outlook of extremely low-interest rates for the foreseeable future, the current outsized spreads in student housing should provide upwards pricing pressure for the next few years. This means we could see cap rates further compress over the next real estate cycle.

Student housing will likely look like a dichotomous market for much of the next real estate cycle. Aggregate data at the national level will impart little meaning as the counterbalancing positive and negative effects at each campus will offset to create the appearance of an uninspiring market. However, within that mix of data, we expect to see a number of universities continue to thrive. The most desirable and best capitalized universities will continue to exploit their competitive advantage to attract the nation’s best students in record numbers which, in turn, will propel their student housing markets. CrowdStreet aims to participate in this trend.