The Hierarchy of Distributions

The higher you go in the capital stack, the less likely it is for that layer to receive distributions.

Much like Maslow’s hierarchy of needs, which outlines the order in which mankind’s needs are met, there is a hierarchy in a private equity capital structure that determines the order of distributions.

It’s important to understand that a commercial real estate property is, in essence, an operating company that is backed by a physical asset. It has revenues, customers (also known as tenants), expenses, net income and net cash flow (hopefully) that may be distributed to its owners. Two equations, Net Operating Income (NOI) and Net Cash Flow, illustrate this point: 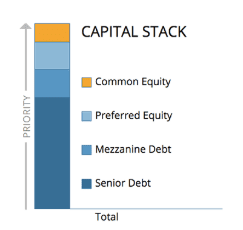 Breaking down the capital stack

It’s important to remember that every layer is dependent upon positive NOI. If an asset becomes distressed you can find scenarios where NOI becomes negative. But assuming that NOI is positive, as is usually the case, here is how each layer of the capital stack receives distributions:

When a sponsor’s pro forma shows net cash flow at the common equity level of the capital stack, it’s a common and understandable practice for investors to view the probability of receiving targeted distributions from a private equity real estate investment at one layer in the capital stack as relatively consistent with any other layer in the capital stack. When an asset performs exceptionally well this might be the case, but, under most circumstances, it is far from the case. As described above, the range of targeted annual returns from as low as 3.5% for senior debt to high as 30% for common equity factor in numerous assumptions, and the probability of receiving distributions is one of them.

Which layer is right for you?

At the extremes of the capital stack, it’s relatively easy to understand that a 3.5% senior debt return is far different than a 30% common equity return. But, what about a 13% targeted preferred equity return versus an 18% targeted common equity return? In this situation, paying close attention to the hierarchy of distributions can help lead an investor to the right investment decision. For the investor who prioritizes cash flow distributions over the possibility of a 20%+ annual return, then the preferred equity investment is superior. Conversely, for the investor who places less value on current cash flow and, instead, is seeking the opportunity to earn greater upside that may exceed 20% annually, then the common equity investment is the superior choice. And, like anything in life, you can’t have it all. This is why each layer of the capital stack has different strengths and weakness. The appropriate choice boils down to your objectives and investment criteria. Just don’t fool yourself into the notion that it’s possible to receive the certainty of cash flow of senior debt along with the targeted returns of common equity.