LeverageLeverage is the use of various financial instruments or borrowed capital to purchase and/or increase the potential return of investment. Assume a buyer puts 20% down on a $5M property. Essentially, they paid $1M to own something worth $5M. Assuming the property appreciates at 5% per year, the sponsor’s net worth would grow to $5,250,000 in a year. Had they... More, or debt financing, is an important and frequently necessary part of most real estate deals. However, as the 2008–2009 real estate downturn highlighted, there are times when too much leverage can be a recipe for significant loss. So, it is important for investors to understand leverage, the pros and cons of using it, what amount of leverage is prudent in a given situation, and how it can influence the risk and reward of real estate investments.

The Upside of Leverage

Real estate owners and developers often rely on leverage as a means of increasing the potential return on investment.  Leverage can increase returns on a property when the cost of using third-party debt financing, such as a bank loan, is lower than the unleveraged returns generated by the investment property.

But a different investor with the same $1 million might decide to use 75% leverage to buy a $4 million office building. From a capital stack perspective the two deals look like this: 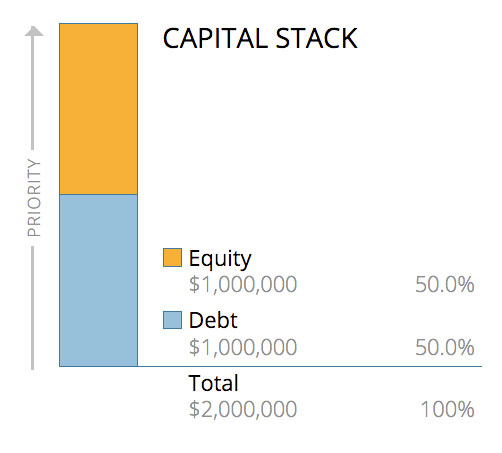 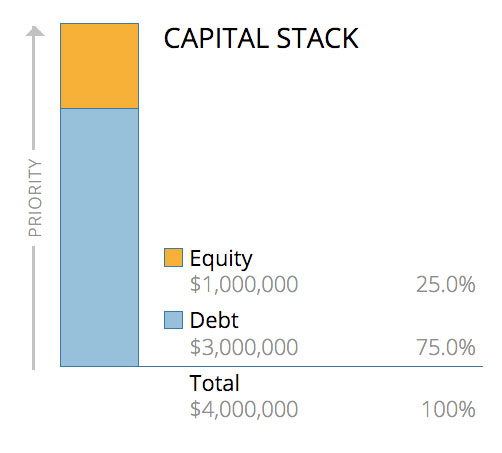 This discrepancy in profits highlights the power of leverage in generating returns (assuming that things go well). The potential for increased returns incentivizes investors to utilize higher leverage.

How Much Leverage is Prudent?

Higher leverage also translates to higher risk. For example, there were plenty of three to five-year loans issued from 2005 to 2007, just prior to the Great Recession, at high leverage amounts of 85% to 90% of the acquisition value. Adding to that risk is the fact that those loans were based off of what we now know were peak property values.

So, when the market shifted and property values dropped precipitously from 2008 to 2009, borrowers found themselves underwater right at the point their debt matured. Similar to what happened in the housing market, certain borrowers found themselves in predicaments where the outstanding mortgage balances were higher than what the properties were worth. When confronted with these situations, the only way to retain the assets was to de-leverage them by placing new, smaller mortgages on the properties (and even this was nearly impossible given the illiquidity at that time) and pay off the balance of the existing mortgages with newly infused equity. Tragically, the solution for many owners was to hand the keys back to the bank and walk away from debt-burdened properties.

While the overuse of leverage was the culprit of many failed deals during the 2007-2009 financial crisis, the risk of high leverage can be mitigated through certainty of execution. For example, if a sponsorIn commercial real estate, the sponsor is an individual or company in charge of finding, acquiring and managing the real estate property on behalf of the partnership. The sponsor is usually expected to invest anywhere from 5-20% of the total required equity capital. They are then responsible for raising the remaining funds and acquiring and managing the investment property’s day-to-day... More has a building that is fully leased to a stellar credit tenant on a long-term lease, investors may elect to take a greater risk given the creditworthy tenant and place a high level of leverage on such a property.

In contrast, if a sponsor has a dozen tenants in a building, all of which are small locally-owned businesses on short-term leases, the safer play is to be more conservative on leverage in light of exposure to future vacancy, and hence lower income from the property is remarkably greater.

Investors can analyze leverage as another metric to gauge the risk versus potential returns of real estate projects when making investment decisions. For example, when comparing one deal with a target 16% Internal Rate of Return (IRRThe Internal Rate of Return (IRR) is the rate at which each invested dollar is projected to grow for each period it is invested. It differs from other metrics in that it accounts for the concept of the “time value of money”, or the fact that a dollar received and reinvested elsewhere today is worth more than a dollar expected... More) and with low leverage and another deal that targets a 19% IRR but with high leverage, the lower-IRR deal may actually be more favorable because the additional 3% difference in targeted IRR may not adequately compensate the investor for the higher financing risk. This is what is referred to as “risk-adjusted returns”.

The Use of Leverage in the Current Cycle

While the downturn in the commercial real estate market in 2008-2009 produced some harsh lessons on leverage for certain owners, it also spawned opportunities for investors in the years that followed. The subsequent deleveraging of commercial real estate in the aftermath of the downturn created a need for higher percentages of equity in capital formation. This shift to the use of greater amounts of equity helped propel growth for real estate investing platforms such as CrowdStreet. Despite the post-recession recovery, some lenders remained relatively conservative and, as a result, lower levels of leverage became more the norm, perhaps for good reason. As the post-COVID-19 market unfolds, lenders are likely to maintain their conservative outlook and continue to lend at lower Loan-to-Value ratios. Similarly, the amount of leverage in the capital stack is a vital deal-screening criteria for CrowdStreet’s Investment team, who seeks deals that are often capitalized with 70%, or lower, leverage.

As mentioned previously, decreased availability of debt capital has created a greater need for equity capital. This has resulted in opportunities for real estate investors to fill that financing gap via both equity and debt real estate investments.