Why CRE Investment Holding Periods are a Moving Target

A commercial real estate holding period begins on the date the newly acquired asset closes and runs until the date the asset is sold. Investors who 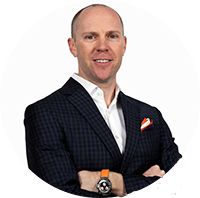 A commercial real estate holding period begins on the date the newly acquired asset closes and runs until the date the asset is sold. Investors who perceive the “targeted” holding period on any one specific asset as a highly reliable number need to think again. Holding periods are estimates that are by no means set in stone.

One of the fundamental principles of real estate investing is that real estate is an illiquid asset class. It is unlike investing in a debt instrument that matures on a specific date or an equity that can be bought or sold with a click of a button. Guidance on a targeted holding period for a real estate asset or fund is just that, guidance. In fact, of all the metrics investors have at their fingertips to evaluate potential investments, the targeted holding period can be the least reliable. In this article, we will discuss the factors and reasoning behind what drives targeted holding periods, why they are easily subject to change, and provide guidance for how to look to other factors in a deal to manage their inherent unreliability.

Probabilistic Instead of Fixed

When it comes to targeted holding periods, investors too often view them like this:

Targeted holding periods are typically depicted as a single year in the future that can range from as low as two to as high as fifteen. At the time of acquisition, a targeted holding period is rooted in logic. Sponsors estimate an optimal amount of time to hold an asset based on a host of assumptions related to factors at the micro and macro level, including but not limited to:

All sponsors desire to sell at the peak of a market to take advantage of the best pricing. Also, the most logical plans can change as new information emerges. Therefore, rather than assume that a holding period remains an immutable aspect of a deal, it is more prudent to use new information, as it emerges, to periodically recast a holding period. 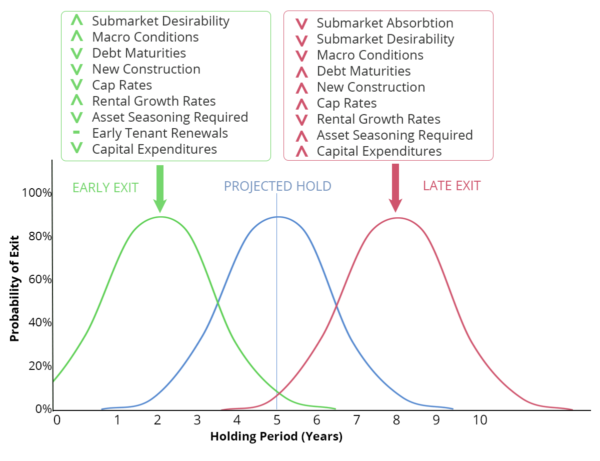 Of the many factors that can shift the holding period curve inward or outward, changes in cap rates are a great example of a factor that can meaningfully affect a holding period. Consider the following example (Keep in mind this is purely an example of mathematical principles and actual results can vary from the example presented):

A sponsor acquires a 400-unit Class B multifamily asset in a secondary market for $40 million (or $100,000 per door). The prevailing market cap rate for this asset is 6%. Given these two pieces of information, you now know the property has $2.4 million of NOI at acquisition. The sponsor is able to structure a 75% LTV purchase with $1.6 million of annual debt service that enables an 8% cash-on-cash return in year 1. The summary numbers look like this at acquisition:

As for the pro forma, the sponsor has underwritten an 18% IRR on a 5-year hold and a 2.06 equity multiple, which assumes that cap rates remain relatively constant over the holding period:

Fast forward to year 3 of the holding period and now the sponsor is reassessing the property’s value and performance against the original business plan. The good news is that the sponsor has been able to grow NOI by 15% over the last three years. Considering that debt service is held constant, cash flow and cash-on-cash returns have increased:

At this point, all we know is that the operating yield on the original equity has increased to 11.6%, which is great but does that mean that property has appreciated in value? Perhaps, but we need to understand current cap rates in order to estimate current value and calculate imputed equity.

If cap rates have expanded to 6.75% over the last three years, the summary numbers change as follows:

By understanding that cap rates have expanded by 75 basis points over the last three years, we now know that, despite a 15% increase in NOI, the property is worth only about $800,000 more than when the sponsor acquired it. While investors might be disappointed to learn that the property has hardly appreciated in value over the past three years, the increased cash-on-cash yield of 10.7% on imputed equity is healthy. As a result, the sponsor is definitely not a seller at this point and investors may be content to continue to earn a double digit yield and patiently await a better market. If the property continues to fail to appreciate but NOI also continues to gradually improve (due to further cap rate expansion), you likely encounter future scenarios where the 5-year targeted holding period could easily stretch to 8-10 years.

Now consider the same operating numbers as above at year 3 but, in this scenario, cap rates have contracted to 5.25%. The summary numbers now look like this:

This scenario would be the holy grail of real estate private equity – namely one in which operations improve at the same time that market conditions dramatically improve. This is why we invest in commercial real estate!

There are two key considerations for sponsors and investors in this scenario:

So, in this scenario, the sponsor is able to deliver an equity multiple to investors in three years that is slightly higher than what the sponsor intended to deliver in five years. In addition, investors get their capital back two years sooner (hence the 30.2% IRR), which should enable them to redeploy their original equity plus gains back into another project that could earn a higher than 5.1% current annual yield. The final analysis in this scenario is easy – the sponsor and investors are sellers and the actual holding period drops to three years.

The example above illustrates an assumption that I view as ubiquitous in private commercial real estate – sponsors want to exit at a point in time that is optimal from a returns and strategic standpoint. This is why you may see a 10-year targeted hold exit within three years or a 3-year targeted hold exit in seven years. In addition, since sponsors are fiduciaries, you are entrusting them to constantly monitor markets and adjust business plans and holding periods to potentially optimize returns. It is the sponsor’s duty to abbreviate or extend holding periods if they deem it in the best interests of investors.

CrowdStreet experienced this exact type of outcome in our Marketplace in 2016 with Alpha Wave Investor’s Residential Fund 2 offering. Fund 2 was a multifamily equity fund targeting Class B and C properties in Las Vegas. It originally targeted a holding period of five years. However, by the time that Alpha Wave acquired its first two properties in the fund, it discovered two things: 1) its targeted submarkets in Vegas had appreciated so quickly that further acquisitions failed to meet the sponsor’s underwriting criteria and 2) it could already liquidate its existing two assets in the fund at substantial profits and deliver a strong net-to-investor return after just six months. Keep in mind that all outcomes are not this favorable and results will vary by investment.

As a result, Alpha Wave opted to wind down its fund four and a half years early. It delivered a 1.5 equity multiple to its investors immediately rather than incur the unwarranted risk of acquiring properties additional properties at valuations it no longer viewed as attractive in hopes of achieving 2.0-2.5 net-to-investor equity multiple over five years. While faced with short term gains, investors were happy to take a quick win.

It is important to recognize that the assumptions that go into calculating that hold period can change, and they might change quickly (as in the case of Alpha Wave) or multiple years into the holding period. The key is to reassess the situation and make a thoughtful, well-informed decision once critical new information is available.

Look beyond the number

As we all know, real estate markets are cyclical and no one has a crystal ball to predict future market conditions. At the end of the day, sponsors are motivated to deliver optimal results for themselves and their investors, and that may translate into exiting a deal early or holding it longer than originally planned. Investors should acknowledge these constraints at the outset and go into each investment with a mindset that viewing a targeted holding period as a range of years rather than a single year is the best approach to estimate that actual holding period with an 80%+ probability of accuracy.

Even though the hold period can and does move, that is not to say that the original targeted holding period should be heavily discounted. It is a relevant part of assessing the merits of a deal and overall return on investment. In addition, the greater the number of factors that seem certain to occur at specific dates in the future (such as an anchor tenant lease expiration or lock out periods on debt repayment) the greater the probability that the targeted holding period will prove accurate.