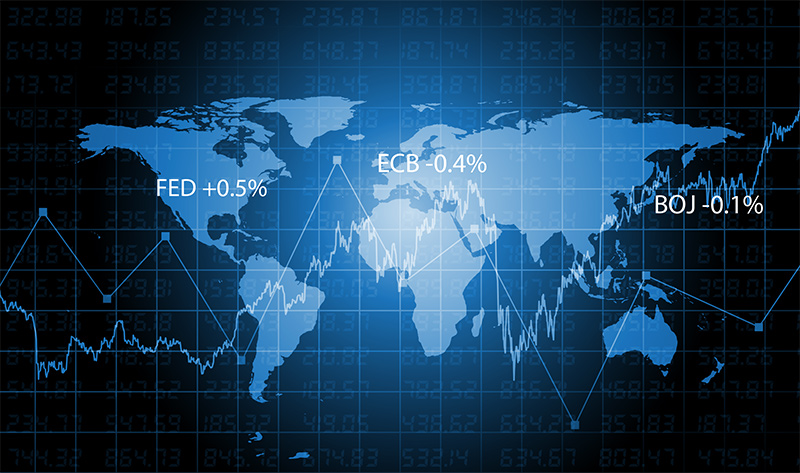 Throughout 2015, consensus on the U.S. interest rate outlook was nearly unanimous; we were entering a rising rate environment and if you were to look a few years out, higher interest rates were a certainty. But in 2016, the story is changing in a major way. Interest rate momentum amongst global industrialized nations is headed in the opposite direction and now Fed’s December 2015 rate hike is increasingly looking an outlier that will not be repeated this year.

The European Central Bank made headlines in early March when it cut its deposit rate again, this time to -0.4 percent. This move is significant as it affects one of the largest currency areas in the world, including its 19 EU member states. With this move, five central banks are now posting negative deposit rates including the ECB, Bank of Japan, Denmark’s National Bank, the Swiss National Bank, and Sweden’s Riksbank.

Negative interest rates create a challenging environment for investors seeking stability and yield. Retail investors choosing to buy German bunds, for example, do so knowing they will be buying at a loss; rates for one to seven-year term bunds are currently all negative. Although rate reductions are used as part of monetary policy to boost struggling economies, a drop into negative territory also makes people skittish about bigger problems that may exist with the economy and potential currency devaluation. The more foreign capital that flows into the U.S., the stronger our currency becomes vis-à-vis foreign currencies, which, in turn, entices further foreign capital inflows. This cycle is in full force and shows no current signs of abatement.

While the current interest rate environment is unsettling in its rarity, as it pertains to U.S. commercial real estate, it is fueling a fire that has already been burning for years. Foreign investment has been on the rise throughout our economic expansion, and the inflow of capital into the U.S. property market took a big jump in 2015. According to data from Real Capital Analytics, cross-border investment more than doubled last year with a total of $91.1 billion in property acquisitions. In fact, buyers from outside the U.S. accounted for 17% of all commercial real estate transactions that took place in 2015.

Investors from across the globe are attracted to U.S. real estate for numerous reasons. The U.S. has a reputation for having a transparent real estate investment market where there is opportunity to preserve principal investment and generate attractive yields compared to other countries. The U.S. is continuing to achieve positive GDP growth as foreign economies falter. Finally, foreign investors tend to view the U.S. real estate market as having good opportunities for growth given that fundamentals such as occupancies and rents continue to improve across many markets.

That foreign demand is piling on top of existing domestic demand to create an investment sales market that is highly competitive. While it would normally be logical to begin calling a top right about now in many U.S. markets, that logic does not contemplate relentless foreign capital inflows associated with negative interest rates. In other words, the new record sale prices that have been set in markets from Manhattan to Minneapolis may not start moving lower anytime soon.

Foreign capital is having the biggest impact on gateway markets such as New York City, San Francisco and Washington, D.C. Foreign investors, including sovereign wealth funds and high net worth individuals, tend to like buying coreCore commercial real estate investments are the least risky offering. They are often fully leased to quality tenets, have stabilized returns and require little to no major renovations. These properties are often in highly desirable locations in major markets and have long term leases in place with high credit tenants. These buildings are well-kept and require little to no improvements... More assets in bigger cities where they know they can achieve liquidity, albeit at lesser returns. Those major metros with large population centers and big economic engines are the ultimate of safe havens. That demand has been evident in the aggressive prices that foreign investors have been willing to pay for assets in those markets with cap rates plunging below 4% for trophy office towers and apartment buildings.

The wave of foreign capital also is expanding out to smaller metros in search of investment opportunities that offer higher yields. For example, foreign investors spent nearly $1 billion in Denver last year, according to a recent article in the Denver Post. That sales activity included the sale of CoBank Center to a South Korean investor in December. That trade set a record high for Denver at $113.46 million or $413 per square foot.

As 2016 unfolds, foreign interest in U.S. real estate appears every bit as strong as it did last year. Negative foreign interest rates have created an insatiable appetite for property holdings in this country through wholly owned or joint venture partnerships, which is expected to continue for the foreseeable future. In addition, the prospects of a rising interest rate environment here in the U.S. in 2016 – 2017 look increasingly unlikely. Fed Chairman Yellen, herself, has even acknowledged in recent weeks that negative interest rates are not off the table for the U.S.

With a near-zero interest rate environment that may become a zero or, dare we say, less than zero environment, don’t be surprised if those “unsustainably” low cap rates across multiple asset classes stay unsustainably low for longer than any of us envisioned in December 2015. U.S commercial real estate will likely continue to be seen as a store of value with a positive yield. This bodes well for the probability of continued stable values, or even the potential for more gains ahead.

How to Profit from Global Negative Interest Rates

Accredited investors looking to benefit from the current global negative interest rate environment are finding new opportunities to access commercial real estate deal flow with CrowdStreet.  Commercial RE investment has historically been limited to deep-pocketed investors, typically those with a minimum $250,000 to invest in each deal.  Thanks to the 2012 JOBS Act and new software which enables real estate syndications at scale, CrowdStreet is now able to provide access to institutional-quality commercial real estate investment offerings with minimums as low as $25,000.

CrowdStreet features only institutional-quality commercial real estate investment opportunities and all of our services are 100% free to investors.  To register for a free account today, please JOIN NOW.