How to Invest in Hotel Real Estate 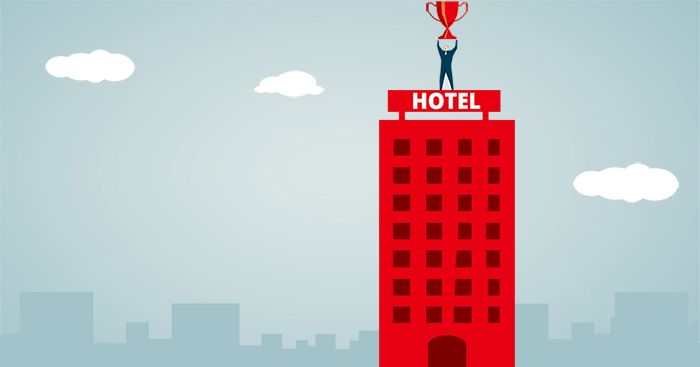 Commercial real estate investments are subject to shifts in supply and demand that can have a notable impact on net operating incomeNet operating income (NOI) equals all revenue from the property minus all operating expenses. In addition to rent, a property might generate revenue from parking and/or service fees such as laundry, housecleaning services, pet rent, and more. Operating expenses include the costs of running and maintaining the building and its grounds, including insurance, property management fees, legal fees, utilities, property... More, profitability and yield. Hospitality is one of the few property types where such shifts are felt almost immediately.

Other asset classes, such as office or retail, utilize medium to long term leases that seek to deliver stable and targetable income streams. Tenants commit to occupy a space and pay a set rate for five, 10 or even 15 years. Even apartment renters sign leases for a year at a time. Hotels have no such lease agreements. At most, hotel guests may be subject to a non-refundable period as the booking date approaches.

In exchange for a transient customer base that is not obligated to long term commitments, hotels have the ability to mark rents to market on a daily basis. The upside of that flexibility is that hotels can quickly react to heightened demand and improving economic conditions and raise room rates as much and as fast as the market will bear. In value add scenarios, hotel operators are also able to realize improved asset performance from repositioning efforts or capital improvements more quickly than other asset classes. The flip side of this fluidity is that hotels are more susceptible to operating fluctuations when compared to other asset classes.

In this article, we will provide an asset class overview, explain the key metrics that are used to evaluate hotel performance, highlight recent changes in use and conclude with thoughts on how to use this information to make informed investment decisions.

Hotels are defined primarily by the services and amenities that they offer. Another key distinction in this category is the “flag” or operating brand that includes the likes of Hilton, Marriott and Holiday Inn among others. The four main types of hotels include:

Hotels have unique industry-standard metrics to track performance and growth, which include average daily rates (ADR) and revenue per available room (RevPar). These data can be used as benchmarks to gauge performance based on past history as well as compare performance relative to peer hotels that are similar in size, characteristics, and location.

ADR: ADR is the measure of the average rate paid for rooms sold and calculated by dividing room revenue by rooms sold in any given period:

Since we know the actual rooms sold in the month of January and the total number of rooms, we also know the occupancy:

Once we know ADR and occupancy, we can now calculate RevPar:

Knowing only that the hotel’s RevPar for January was $76.50 isn’t necessarily helpful. However, when we take this information and compare it the RevPar for this same hotel over each of the preceding 12 months as well as compare it to the RevPar of its competitive set for the month of January, we now have a highly useful metric for understanding the performance and competitiveness of this hotel over the defined period.

The two coreCore commercial real estate investments are the least risky offering. They are often fully leased to quality tenets, have stabilized returns and require little to no major renovations. These properties are often in highly desirable locations in major markets and have long term leases in place with high credit tenants. These buildings are well-kept and require little to no improvements... More customer groups that fuel demand for hotel rooms are tourism and business travelers. Hotels also have a variety of demand drivers specific to their local market, such as colleges, events and tourist attractions. Tourism tends to drive traffic during weekends or all week during high season periods. Tourism also can be seasonally based on the locale, such as winter ski resorts and fall foliage tours.

Business travel tends to drive occupancy from Sunday through Thursday. Some hotels are better positioned to capture the business traveler, such as with those with on-site meeting and event space. Hotels also can benefit from locations adjacent to or near convention centers. Other hotels are destinations in their own right for business or tourist traffic due to particular locations or amenities, such as casinos or water parks. In addition, hotels can appeal to guests who are seeking out convenience, such as proximity to an airport or a major highway or interstate.

Demand drivers can change as a metro grows. For example, hotels located in CrowdStreet’s headquarters of Portland, OR were, as recently as four years ago, plentiful and cheap. But these days, Portland hotel rates have soared in conjunction with the economic and population growth that our city has enjoyed in recent years. Rooms that were previously booked for $150 per night now cost $350 per night or more. Further fueling Portland’s hotel demand are a thriving foodie scene and a favorable sales tax environment that attracts luxury goods shoppers. A compelling metro story is one factor in what makes hotel investing attractive because it is the daily marking to market of rates that allows investors to capitalize on growth as quickly as it materializes.

The hotel industry has seen substantial change both in terms of how hotels are developed and used as well as how they are marketed. Most changes in use are rooted in the adoption of technology.  The following are few of the highlights:

Online Travel Agencies (OTAs): OTAs have had a major impact on how hotels are booked since their inception some twenty years ago. After years of consolidation, the space is now dominated by two players – Expedia and Priceline. OTAs are obviously now pervasive and, as you might expect, have love-hate relationships with hotel operators. On the upside, OTAs drive tremendous traffic to hotels and can readily fill last minute vacancies. The downside of OTAs is that they come with steep commissions that can reach as high as 25% of the booking amount. In addition, the more traffic that flows through OTAs, the more hotels become dependent upon them.

Millenial Hotels: Millenials are driving changes in the use of practically everything they touch and hotels are no exception. Through their desire for affordable yet “cool” hotels in urban locations, hotel brands have been rapidly evolving to deliver concepts that cater to their tastes. These hotels feature rooms that are only ½ – ? of the size of their traditional competitive set. To generate the space savings, traditional improvements and fixtures such as closets and desks are removed. In exchange for small rooms, these hotels invest heavily into technology and hip, vibrant common areas.

Hotel brands such as Yotel, Marriott’s AC and Moxy Hotel and Commune’s Tommie brands have emerged in this new hotel segment. On the affordable end of the spectrum, Starwood’s Aloft Hotels target the Millenial demographic. Even Sir Richard Branson is getting in the mix with a new millennial-oriented chain, dubbed Virgin Hotels. While some pundits argue that the Millenial hotel is a fad, it is nonetheless changing the industry landscape and bringing a new breed of hotel to a magnitude of urban destinations.

Use periods: Another way in which technology is changing the use of hotels is by enabling guests to redefine the period of the traditional night stay. Microbooking apps such as HotelsByDay, Recharge and DayUse allow guests to book hotels by the hour and, in some cases, even by the minute. These apps are yet another example of how technology can be used to generate efficiencies – in this case to fill intraday hotel vacancies that would otherwise go unused.

Anyone who has traveled for either business or pleasure can grasp the basic building blocks of a successful hotel investment, which include: product offering, service, location, and competitiveness.

It also doesn’t require an industry veteran to appreciate that investing in a five-star hotel doesn’t necessarily correlate to earning five-star returns. When you stand in the lobby of a five-star hotel and see the huge staff counts and lavish surroundings and then compare that hotel to a limited-service hotel with a small staff that operate in a functional yet cost-efficient environment, it wouldn’t shock you to learn that the limited-service hotel may actually be more profitable on a per room basis.

The takeaway is that hotels across all categories and price points have their own market segments, competitive sets, and corresponding metrics. The key is to conduct a comparative analysis amongst similar hotels in order to determine whether or not the subject asset stands to win greater than, equal to or less than its fair share of its market demand. Much of that analysis is a logical application of things that, from the perspective of a guest, provide a compelling hotel experience. After all, if you love it then others will too and they will be willing to pay up for the experience. If you pair a compelling experience with an efficient cost structure, you have a winner.

There are a variety of entry points into hospitality real estate investments with a host of strategies. If you would like to learn about other asset classes,  please check out our article, “The Definitive Guide to Real Estate Property Types”.