There is a lot more to understanding investment returns in a commercial real estate deal than a quick glance at summary metrics and it starts with targeted returns. The assumption that the path to the high realized portfolio returns is simply the sum of a series of high individual targeted returns is a recipe for disaster. Despite this, it is tempting for investors to take information at face value, because challenging assumptions requires some context. This is why it is common for less sophisticated investors to fall prey to what I refer to as the “Returns Fallacy”.

The Returns Fallacy begins with assuming that all deals are created equal and, as a result, simply selecting a portfolio of investments that target the highest returns. A simplistic analysis suggests that a targeted Internal Rate of Return (“IRRThe Internal Rate of Return (IRR) is the rate at which each invested dollar is projected to grow for each period it is invested. It differs from other metrics in that it accounts for the concept of the “time value of money”, or the fact that a dollar received and reinvested elsewhere today is worth more than a dollar expected... More”) of 20% is better than a 15% targeted IRR, right? Wrong. When investors select investments based solely on the criteria of a targeted IRRs, they ignore the volatility assumed in achieving those targeted returns. In this article, we will explore how risk intertwines with targeted IRRs with a focus on volatility of returns.

The four food groups for risk

I previously published an article that discusses the four main risk-profile categories in depth. For the purposes of this article, I will revisit only the highlights of each category, which represent a sliding scale for risk starting with coreCore commercial real estate investments are the least risky offering. They are often fully leased to quality tenets, have stabilized returns and require little to no major renovations. These properties are often in highly desirable locations in major markets and have long term leases in place with high credit tenants. These buildings are well-kept and require little to no improvements... More strategies as the safest play and gradually stepping out farther on that risk spectrum with opportunisticOpportunistic real estate investments are the most high risk/high reward investment opportunities, requiring major development work. Opportunistic properties tend to need significant rehabilitation or are being built from the ground up. They have the chance to reach the highest rate of return for investors, but they little to no in-place cash flow at the time of acquisition and have the... More strategies viewed as the riskiest.

Core properties are relatively stable assets that are typically located in major metros, such as high-rise office towers or apartment buildings in New York City, Chicago or San Francisco. They are best-in-class properties in top locations with high occupancy levels and good credit tenants.

Core plus assets may share many of the same characteristics as core assets with one or more exceptions that create an added layer of risk. Some examples of those exceptions might include the age or condition of the asset, lower tenant credit or a less than stellar location.

Value add assets generally have a problem that needs fixing, such as leasing to improve significant vacancy, building renovation or bringing in new tenants to boost the quality of the rent roll. The purchaser is usually coming in with a specific business plan to improve an underutilized asset.

Opportunistic deals are often extreme turnaround situations. There are major problems to overcome, such as a large vacancy, structural issues or financial distress. Opportunistic strategies may involve acquiring distressed or foreclosed assets from banks or servicers.  Alternatively, opportunistic investors may also acquire senior loans of distressed assets at a discount from banks or servicers with a plan to either implement a workout with the existing borrower and sell the loan or take title to the asset via foreclosure on the borrower.

When comparing these two investment choices, it’s easy to become seduced by the allure of a targeted 20% IRR and opt for the opportunistic office deal, but is it really better than the core deal? Perhaps, but to make that determination, it is critical to assess the key attributes of each deal and how they affect the likelihood of the asset achieving its targeted returns:

From the information provided above, we now know one critical piece of information:

A good way to think about the difference between Example #1 and Example #2 is to view them through a standard deviation to targeted returns graph: 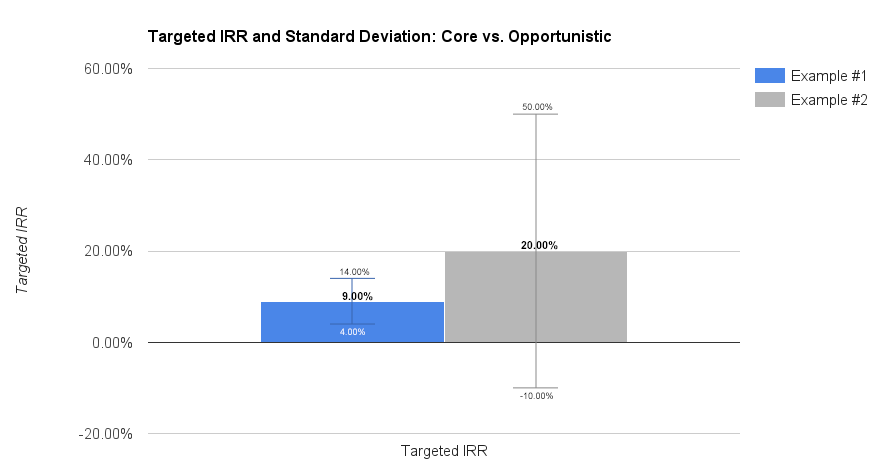 In the graph above, the blue and grey bars represent the targeted IRRs for the Core Deal (9%)  and Opportunistic Deal (20%) respectively. The error bar for each deal represents a one standard deviation variance in each deal’s return – 5% for the Core deal and 30% for the Opportunistic deal. The standard deviation in the error bar is a visual representation of the implied volatility of each deal’s targeted returns.

Therefore, within a one standard deviation move from each deal’s targeted return (which statistically speaking captures 68.2% of probable outcomes) you get the following upside and downside scenarios:

In the upside scenario, the Opportunistic deal far out earns the Core deal by a margin of a 36% IRR. However, in the downside scenario, the Core deal still earns a positive return while you take a loss on the Opportunistic deal. What this essentially means is that the Core deal is safe – you can only realistically hope for a 14% IRR but you also have only an outlier chance of losing money. This is the type of deal where you can sleep safely knowing your investment is secure. If capital preservation is paramount, then Example #1 is your deal.

Conversely, the Opportunistic is highly risky – it has huge upside with a 50% IRR but you also lose money within a one standard deviation move to the downside if things don’t go according to plan. This type of investment is ideal for high-risk capital where you accept the possibility of a loss in exchange for the opportunity to achieve a substantial equity multipleIn commercial real estate, the equity multiple is defined as the total cash distributions received from an investment, divided by the total equity invested. Essentially, it’s how much money an investor could make on their initial investment. An equity multiple less than 1.0x means you are getting back less cash than you invested. An equity multiple greater than 1.0x means... More.

As demonstrated above, risk goes hand-in-hand with the reward or projected return. No investor wants to take on the high risk of a value-add or opportunistic investment only to be compensated at a rate that is more on par with a lower risk core or core-plus deal. While every situation is unique, general guidelines exist to help determine whether the amount of risk for any given deal is commensurate with the targeted amount of return, otherwise known as a risk-adjusted return. Based on data from more than 80 deals offered on the CrowdStreet Marketplace since April of 2014, the following is a snapshot of targeted IRRs for different risk profiles. While by no means an absolute guide, the matrix does provide ranges of actual targeted IRRs with corresponding risk profiles that CrowdStreet determined to as generally commensurate with the amount of assumed risk at the time the offering was brought to market:

In a perfect world, an investor could simply pick the investment opportunities with the highest IRRs and lock in high returns. However, you now know that such a strategy would only serve to expose that investor to the Returns Fallacy. Diversification is the antidote to Returns Fallacy as it improves overall portfolio returns while also reducing risk – a concept known as moving closer to the efficient frontier. Portfolio diversification can be achieved in a variety of ways, such as investing across property types and geographic markets, as well as with different sponsorsIn commercial real estate, the sponsor is an individual or company in charge of finding, acquiring and managing the real estate property on behalf of the partnership. The sponsor is usually expected to invest anywhere from 5-20% of the total required equity capital. They are then responsible for raising the remaining funds and acquiring and managing the investment property’s day-to-day... More and business plans. It also is important to allocate capital across different risk profiles, particularly as we know that commercial real estate is cyclical. That diversification can be especially important in building a portfolio that can withstand a market downturn.

How an investor chooses to weight that diversification depends on an individual’s tolerance for risk. It is also important to note that some investors look to commercial real estate as a specific vehicle for taking higher risk to target higher returns and diversify risk through other asset classes such as fixed income. While there are no absolute right or wrong answers when it comes to real estate portfolio diversification, its merits are proven.

The CrowdStreet Marketplace makes a point to include a variety of different types of offerings across its platform to help investors build portfolio diversity as they continue to increase their real estate investments. CrowdStreet also provides investors with a single dashboard to track and manage those investments.