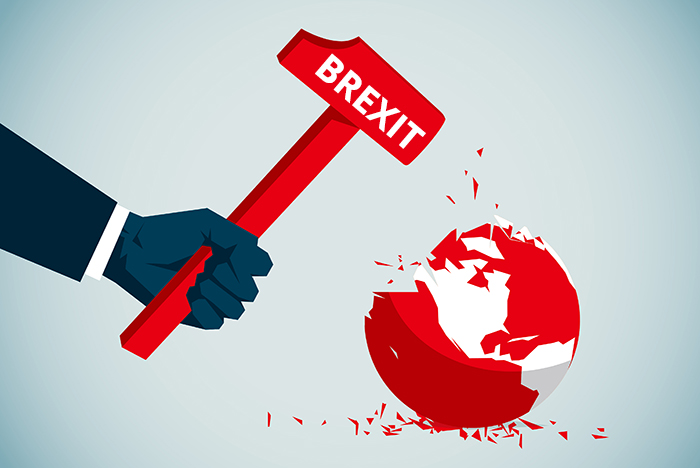 The U.K.’s recent vote to leave the European Union unleashed a wave of uncertainty that sparked volatility across global equity markets and has caused a sharp drop in currency value for Britain. In the roughly two weeks that has transpired since the Brexit vote, it is increasingly becoming apparent that the effects of it (assuming it holds) are more likely to be felt regionally than globally with both losers and winners. In this article, we first delve into why Brexit hurts the U.K. from a real estate perspective and then move on to discuss how it may work to the benefit of U.S. real estate markets.

Impact on the U.K.

Initially, the Brexit vote hammered capital markets across the globe. Plunging stock markets chalked up a whopping $3 trillion in losses globally in the days immediately following the vote. But markets have since recovered. Even the FTSE 100 closed on July 1st at 6557, 3.4% above its June 23rd pre-Brexit close of 6338. So, if the financial markets have shrugged off Brexit, it begs the question, “does Brexit really matter?”.

The answer still appears to be “yes” but it is the U.K. itself where it most matters from a downside perspective. As Mark Zandi, chief economist at Moody’s Analytics pointed out last week, “In general, this is regional EU-U.K. shock. It is not a global economic shock.” As Brexit unfolds, it also appears that other U.K. markets may not bounce back as quickly as the FTSE 100. The U.K. real estate market, particularly London, stands to emerge as the biggest loser due to a combination of two factors.

The first factor, as has been largely reported ahead of the vote, is that a Brexit would result in certain financial functions and key tenants leaving London and moving operations abroad to locations such as Frankfurt, Paris and Dublin. This is already starting to happen as the Financial Times reported on June 26th that major U.S. banks such as JPMorgan Chase, Goldman Sachs, Bank of America, Citigroup and  Morgan Stanley are taking actions to shift up to thousands of employees out of London. For the U.S. banks, the key issue is the uncertainty for them to be able to continue to “passport” their services into the 28-state EU block from London. If that ability is revoked through Brexit then the U.K. is no longer the European financial beachhead for U.S. institutions and it shifts elsewhere, likely to Frankfurt or Paris. Even U.K. bank HSBC has stated it could move as many as 1,000 trading jobs to Paris in the event of Brexit. In total, Jefferies International Ltd. estimates that London could lose 100,000 jobs to continental Europe.

As Matt Goulding, Director of Real Estate Securities at CenterSquare, the real asset arm of BNY Mellon point out, “it is worrying that, in the last six months, office construction has increased by 28% and a record number of schemes have started, with 38% of space currently under construction scheduled to complete in the next 12 months. Even if the schemes that haven’t begun construction don’t begin, there will be a lot of new supply. Current space under construction is 6.5% of the total market but if all schemes continue as planned this will go above 10% by 2019.”

If you put it all together, we have a London real estate market that is facing the prospect of weakening demand at the same time that it is undergoing its largest increase in supply since 2008. It doesn’t require robust analysis to see why the London real estate market stands to be a big loser from Brexit. In fact, the pain for U.K. real estate markets is already materializing. On July 4th, Standard Life Investments, a global investment manager headquartered in Edinburgh, suspended trading in its UK Retail Property Fund following a run on redemptions. Given the daily liquidity of such a fund, it’s a logical first spot for distress to appear and a harbinger of more to come.

What Does Brexit Mean for U.S. Investors?

The likely cumulative result is that the flight to safety that has been led by a wave of foreign investors pouring money into the U.S. real estate market in recent years looks poised for an extended run. Negative interest rates that have emerged in certain countries in Europe and Asia have motivated investors to seek out options where they can both preserve capital and produce yields. Foreign investors acquired a record $91.1 billion in U.S. commercial and multifamily properties last year, which is more than twice the amount of foreign investment that occurred in 2015, according to Real Capital Analytics.

The U.S. remains an attractive destination because of its positive economic growth and favorable outlook across most real estate property types. Added to that, the U.S. real estate market is typically viewed as a highly liquid market given its size, variety of choices and strong investor demand. Finally, despite our own political challenges, the U.S. is generally not prone to self-inflict the kinds of wounds as the U.K. is now proven to be capable of doing.

Investing in the Trend

For these, and other reasons, real estate is often viewed as a “safe haven” for capital. Yet investors still need to be mindful that real estate investment is not without risk. Investors need to make sure that they are comfortable with the risks they are taking, and they also need to make sure that the target returns are appropriate for the risk level, otherwise known as risk-adjusted returns. The CrowdStreet Marketplace is continuing to expand its offerings to include a variety of debt and equity real estate investing opportunities that fit different risk-return profiles. To register for a free, no-fee investing account and gain immediate access to our current U.S. commercial real estate investment offerings, please click JOIN NOW.