All Resources, How To, Investing

How to Invest in Multifamily Real Estate 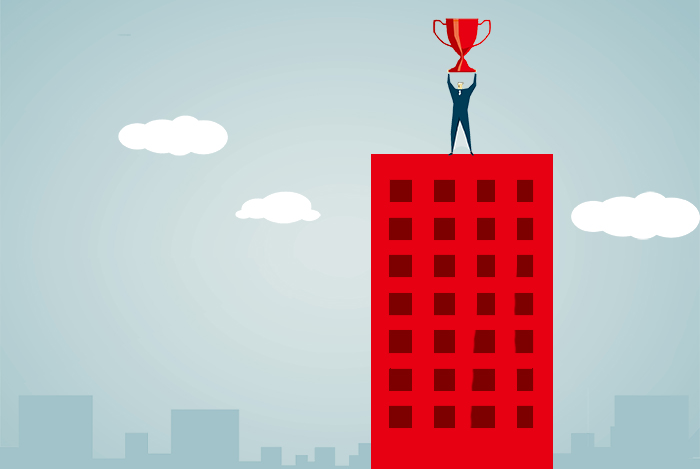 In this article, we provide an overview of the multifamily asset class, discuss demand drivers, highlight changes in use and conclude with a synthesis of these factors to better equip investors with the knowledge to make informed investment decisions.

As an asset class, multifamily spans a wide spectrum of residential properties that technically includes all buildings containing at least two housing units, which are adjacent vertically or horizontally. Multifamily is also characterized by shared physical systems whether it be walls, roofs, heating and cooling, utilities or amenities. While multifamily can include townhouse, condominium and apartment projects, for the purposes of this article, we will focus on apartments since they are most commonly acquired as an investment.

Classification: The industry “grades” multifamily properties as Class A, B or C based on criteria such as age, quality, amenities, rent, and location among other factors.

A good way to begin analyzing U.S. multifamily demand drivers is to consider that households are comprised of either owners or renters. According to the U.S. Census Bureau, homeownership, as of March 2016, currently stands at 62.9% (with renters at 37.1%), which is its lowest level in more than 25 years. There are roughly 117.4 million total households: 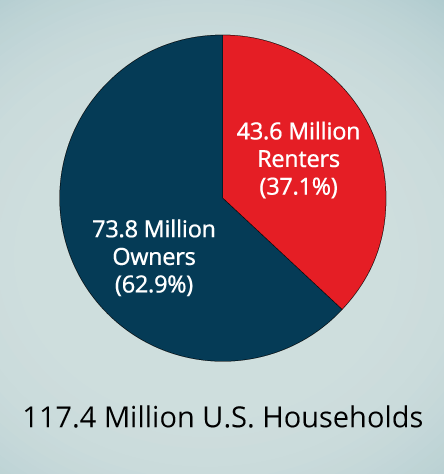 Demand drivers, for the most part, will 1) increase or decrease the total number of the U.S. households 2) change the percentage breakout of renters vs. owners or 3) both. While there are myriad factors that contribute to multifamily demand, the following comprise the key drivers: 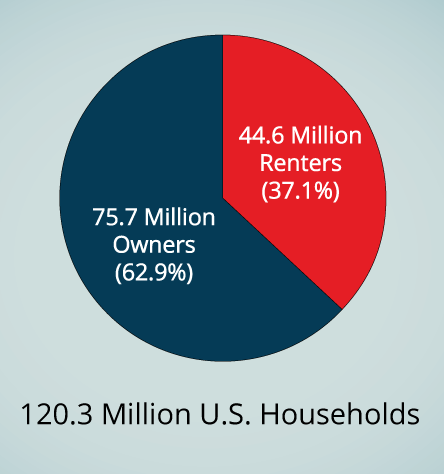 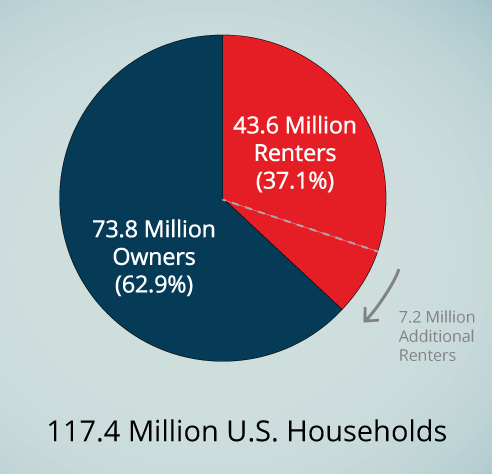 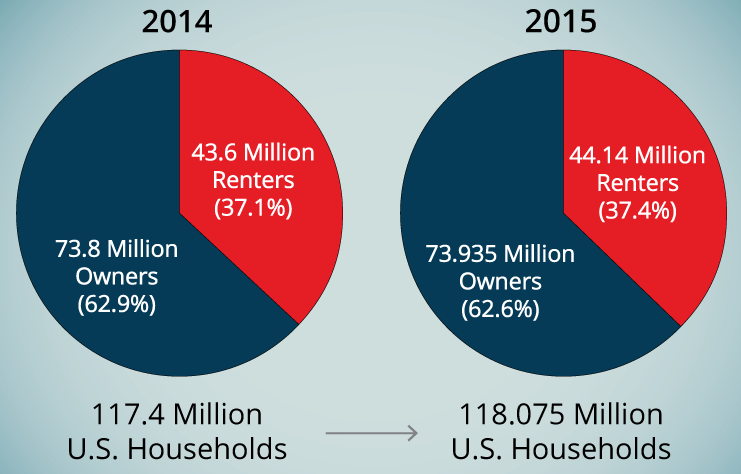 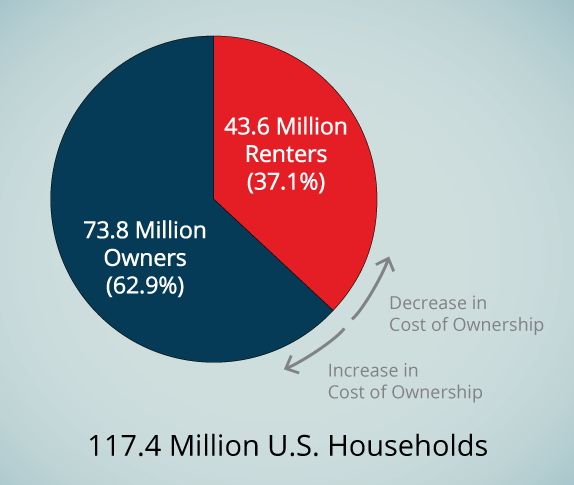 Demographic trends have made their own contribution to the growing popularity of renting. The behavior and choices of different demographics has direct effects on the multifamily trends, and now more than ever. According to a study published by the Joint Center for Housing Studies of Harvard University, the increase of 9 million renter households the U.S. has experienced since 2005 is the largest increase in any 10 year period on record.

The aging of the millennial generation (born 1985–2004) is one key demographic trend that has lifted the number of adults in their 20s, the stage of life when renting is most common. Millennials, as a demographic, are delaying marriage, children and moving to the suburbs to buy a home until later in life. This effect has expanded the year-over-year renter pool nationwide. Millennials also are carrying a higher load of student debt in comparison to previous decades, which makes it more challenging to finance a first-time home purchase.

Millennials are not the only demographic making choices in favor of multifamily. Empty nesters are downsizing and opting for low-maintenance rental townhomes and apartments. In addition, both Millenials and empty nesters have been drawn to the urban renaissance movement that is seeing people move back to city centers to live, work and play. This movement is creating more demand for apartment and condo rentals in and around busy downtown and central business districts.

In combination, these trends have boosted the numbers of renters in all age, income, and household categories. Millennials have pushed up the number of renters under age 30 by nearly 1 million over the past decade, while members of generation X (born 1965–1984) added 3 million to the ranks of renters in their 30s and 40s, even though the population in this age range declined. The largest increase, however, was a 4.3 million jump in the number of renters in their 50s and 60s. This growth reflects the aging of baby-boomer renters (born 1946–1964) as well as declines in homeownership rates among this generation. While households in their 20s make up the single largest share, households aged 40 and over now account for a majority of all renters.

Changes in Multifamily Use

Many of the demographic trends, as mentioned above, have led to a number of shifts in multifamily use as the next generation of multifamily developments aims to provide a modern living experience. The following are highlights of the factors changing where apartments are located and what they look like:

Walkable / Bikeable locations: In conjunction with the urban renaissance, renters now desire their apartment to be located in close proximity to neighborhood grocery stores, cafes, pubs, and restaurants. In decades past, it was more common to see a multifamily property tucked away in a secure and private setting but that trend has given way to the walkable, bikeable property.

Transit-oriented developments: As commuting via public transportation has become increasingly popular amongst the renter sect, we are seeing more apartment buildings pop up along transit lines. Transit-oriented properties command higher rents and can expect to maintain higher occupancies all things being equal amongst its competitive set.

Modern amenities: With properties that are increasingly walkable and bikeable, renters now desire a host of modern amenities. According to a 2015 nationwide survey conducted by the NMHC, the following are highlights of what renters desired most:

While not top ten in polling, the following are additional modern amenities that renters also seek out:

Due to recent changes in use, the amount of new apartment construction nationwide and the current disparity between the cost to build vs. the cost to acquire, many investors are seeking out opportunities to invest in multifamily development rather than multifamily acquisitions. Some of the key points to consider when weighing development vs. acquisition investment opportunities include:

While multifamily real estate has its own unique complexities and risk factors, from an investment and risk analysis perspective, it is generally regarded as the safest of all commercial real estate asset classes (although I know many industrial operators that would challenge that statement, which we will discuss in an upcoming industrial-specific article). This is predominantly due to higher average occupancies with lower price volatility when compared to other asset classes.

For signs of evidence to support this argument, consider that apartments have a lower cost of capital and wider availability of debt capital. For example, government-backed agencies, Fannie Mae and Freddie Mac, will lend on multifamily assets but not on other commercial real estate asset classes. In addition, when looking back at the last recession, generally speaking, multifamily is the asset class that performed the best during the depths of the financial crisis and was the asset class to lead the recovery. There is something to be said for the notion that people still need a place to live no matter the phase of the economic cycle. During recessions, people can lose their homes and be forced into the renter pool, which you as now understand, increases rental demand through a shift in the owner vs. renter household breakout. Once a recovery begins, the shorter lease terms of multifamily allow owners to adjust more quickly to changing market environments.